All is not well where the bee is concerned. There has been a steady loss of bee colonies reported over the last few years. The bee-mortality rate is especially worrying in America. Normally during the winter, about 10% of the bee population will die, but since the harsh winter of 2006-2007 the mortality rate in the United States rose to 30 – 35%. Some American beekeepers even reported a death toll of 90%! In Europe the bee mortality-rate has been above average as well, namely 20%.

But also in the summer months we loose lots of colonies. Since a few years colonies perish because the foraging workerbees don’t return to their hive. This process can go very rapidly and totally surprise a beekeeper. This phenomenon is called CCD, Colony Collapse Disorder. 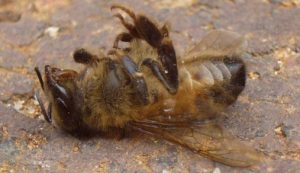 Another very disturbing phenomenon is the rising number of “bad queens”, what reveals itself in insufficient worker brood. It is not yet clear what exactly is going on with these queens, but there are several possibilities:
The queens are either not/insufficiently fertilized by drones, or
The quality of the drone sperm is affected, or
The reproductive organs of the queens are affected. (Possible due to chemical causes.)